In this Uganda Foods Guide we show you step by step how to cook Meats in Uganda using locally available ingredients during your business visit.

When we talk about meat in our traditional Uganda Meat Recipes, we mean all flesh of animals and birds both domestic and wild and that of their internal organs. 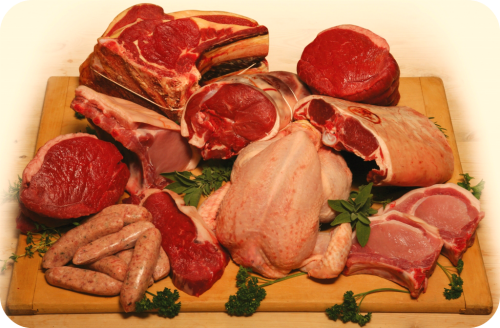 Some of the names used for the different animal and bird meats cooked in Uganda, we have also include local translations for some of these meats so you can know what to ask for when seated at a local restaurant and the waitress is not so familiar with your foreign language.

Meat from a Calf -Enyanna is called Veal

A Pig is called - Embizzi in Luganda  but the meat from this animal is still called pork locally. In more sophisticated localities Pork refers to Meat from pig that has not been cured i.e. not Preserved either using salt or smoke.

Ham is the top part of pigs leg that has been cured ie preserved using salt or smoke and  Bacon is the Meat from the back or sides of a pig that has preserved that is cured using salt.

All meats from wild animals are called Game and we have listed for you some of the traditional wild animals and birds with meats commonly eaten among Ugandan communities.  Lately some of these Game birds and animals have been domesticated e.g Guinea Fowl, Quails  We have also included some of the local names of these wild animals.

These are the edible internal organs of animals and birds.

They include the stomach and other internal organs e.g:

Note: the pigs intestines are often used as Sausage casings.

The following parts of the body animal are also offals:

The Nutrient contents you will gain from eating offal’s/variety meat:

Protein: Protein in offals is of high biological valve because if well cooked it is easily digested.

Fat: There is less fat in offal except the suet around the small intestines and delicate organs like the liver, heart, Gizzard in poultry but more muscle in general.

Carbohydrates: There is glycogen in the liver but not a good sauce.

Liver: Is a good source of Vitamin A, Retinal Vitamin c, Calcium, Iron and Zinc.

Heart: Has Vitamin A (Retinol)

Note: Pregnant moms are not advised to eat a lot of liver in their early stages of pregnancy because it causes birth defects due to Vitamin A in them.

Have a Great Uganda FOOD Recipe?

Do you have a great Recipe or Question about Uganda Cuisine? Share it!

Click below to see Recipes from other visitors to this African Food Guide and Answers to Frequently Asked Question about Food in Uganda...

Meat Luwombo Recipe - Meat Stew Cooking Method 4 Not rated yet
How to Cook Meat in Uganda - Method four (4) What is Luwombo? Oluwombo or Luwombo is a traditional Method of Cooking from Uganda. It is …