Are you a Vanilla lover browsing online to find which type of Vanilla product will suite your purpose?

a Gourmet Chef wishing to try out a new Vanilla recipe,

a perfumer working on your next Vanilla Scented fragrance

You’re just a Vanilla buyer searching online for information about the best Vanilla Beans to buy and  how to store your newly purchased batch of Vanilla Beans.

If you fit one of the descriptions I have mentioned above, then you just might have reached your Vanilla Destination…!

Please take some time to read through our resources because we have compiled this Vanilla Consumer’s Guide to assist you get the most out of the Vanilla beans you buy so expensively from Uganda, Madagascar, Indonesia, Mexico , China or from Papa New Guine (PNG).

New to the Vanilla industry Value Chain, no problem...!

This Vanilla Consumer’s Guide presents to you an opportunity to learn about Vanilla and be able objectively evaluate the quality of different Vanilla Beans and Vanilla products presented to you, before you make your first Vanilla purchase. This Vanilla Consumers’ Guide could also help you launch your very own Vanilla Brand with products to sell at your Vanilla Shop.

On this Vanilla Consumer's Guide:

On this Vanilla guide you will also be able to follow relevant Vanilla Industry news Updates, Share your Vanilla Story and ask questions about Vanilla.

Your also have the chance to buy Vanilla Beans right from the source! 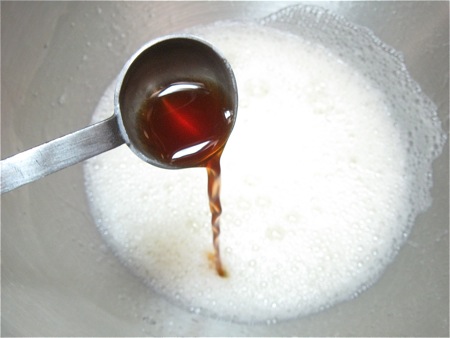 Vanilla is the most popular flavor in the world; the Vanilla flavor is signified by a very sweet, creamy character imparted by Vanillin, the most abundant flavor and aroma chemical present in cured vanilla beans.  The characteristic aroma and flavor of vanilla is the result of various chemical and biochemical processes that take place during the curing and conditioning of vanilla beans. The vanillin content of cured beans of different origins varies from 0.3 percent to 3 percent.  The vanillin content of beans depends upon a number of variables, such as species, bean maturity at the time of harvest and curing process.

Although the presence of vanillin in the vanilla bean greatly enhances the quality of vanilla, its absence does not change the basic vanilla character or render the beans worthless. A number of other major, minor and trace constituents play very significant roles in imparting vanilla with its characteristic aroma and flavor.

All of these constituents together produce the delicate, rich and mellow aroma with sweet spicy, woody and balsamic notes.

Researchers have identified nearly 200 different chemical components that contribute to the complex aroma and flavor of cured vanilla beans.

According to the Oxford dictionary, Vanilla is described as a substance obtained from vanilla pods or produced artificially and used to flavour foods or to impart a fragrant scent to cosmetic preparations. 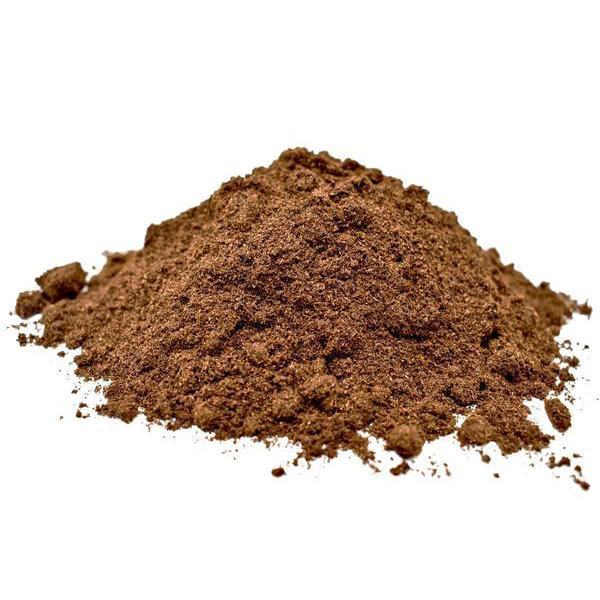 Vanilla is also described as the second most Expensive Spice in the World after Saffron because growing the vanilla seed pods/beans is labor-intensive.

We often hear the term "herbs and spices" often during cooking because herbs and spices are vital ingredients in many dishes. They add flavor, aroma, color, texture and even nutrients.

But what makes Spices different from Herbs?....

Both spices and herbs are parts of plants (fresh or dried) that are used to enhance the flavor of foods. They’ve also been known to preserve foods, cure illness and enhance cosmetics.

The difference between the two is where they are obtained from a plant.   Herbs come from the leafy and green part of the plant. Spices are parts of the plant other than the leafy bit such as the root, stem, bulb, bark or seeds. And this is what makes Vanilla Beans a Spice.

So, why is Vanilla so popular…?

Vanilla has become irresistible to world today not just because of the sweet aroma Vanilla imparts to countless food, beverage and Dessert Vanilla recipes; but vanilla has also been found to posses some interesting health benefits when you consume it in your food or apply it on your skin or hair:

Vanilla aides weight loss – Vanilla can help reduce the amount of sugar you use in your food and also suppress your appetite.

Herna Hernando Cortez
a Spanish Conqueror of the Aztecs, is an Iconic figure in the History of Vanilla

So, where did this Vanilla we love come from…?

Vanilla Beans originated in Mexico, for hundreds of years the Totonaco Indians of the East Central Coast of Mexico were the only known Vanilla farmers in the world.  Vanilla grows within the 20-degree band either side of the Equator, the vanilla you know best, Vanilla planifolia, traditionally grew wild on the Atlantic Gulf side of Mexico from Tampico around to the northeast tip of South America, and from Colima, Mexico to Ecuador on the Pacific side. It also grew throughout the Caribbean.

When the Aztecs defeated the Totonaco Indians, one the most important tribute they demanded was of the Thilxochiti Vine , Vanilla Pods/Beans. These pods were used with cacao beans to make a drink called Chocolatl.  In 1520 Herna Hernando Cortez, in turn conquered the Aztecs. In his magnificent banquet hall, Montezuma, Emperor of the Aztecs greeted Cortez and offered him this drink in a golden goblet. Cortez astounded by the delicious flavor of Chocolatl demanded to know the ingredients. Montezuma, the gracious host told him it contained ground corn, cacao beans , Vanilla pods and honey.  Alas, Montezuna not only lost the secret to his favorite beverage, his riches and his empire, but also his life, as Cortez executed him shortly thereafter.

When Cortez returned to Spain, he brought with him a great deal of Gold, Silver and jewels plundered from the Aztecs. Of even greater importance, he also brought Cacao beans and Vanilla pods, which the Spaniards called “Vainilla” meaning “Litte Scabbard”.  The drink made from cacao beans and Vanilla pods was an instant success in and extremely popular throughout Europe. At first it was a luxury only the nobility and very rich could afford as for eight years , vanilla was used in the chocolate drink. In 1602, Hugh Morgan, apothecary to Queen Elizabeth I , suggested that vanilla could be used as a flavoring itself. This was the first step on the path toward dominant position vanilla now hold in the flavor world.

Until the mid-19th century, Mexico was the chief producer of vanilla. In 1819, French entrepreneurs shipped vanilla fruits to the islands of Réunion and Mauritius in hopes of producing vanilla there.

Vanilla, a species of a climbing Orchid, grew beautiful foliage and flowers in each of these regions, but never produced any Vanilla pods. A mystery to the world until 1836, a Frenchman observing very closely the original Vanilla plant, in Mexico, discovered the reason. Each of the orchid blooms was visited by the small ""Melipona"" bee. This specialized little creature provided the pollination which produced the fruit! Only in Mexico is the Melipona Bee found. 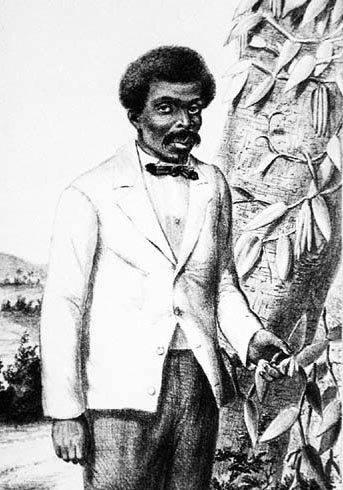 In 1837, Belgian botanist Charles François Antoine Morren pioneered a method of artificially pollinating the Vanilla flower but the method proved financially unworkable and was not deployed commercially.

In 1841, Edmond Albius, a slave who lived on the French island of Réunion in the Indian Ocean, discovered at the age of 12 that the plant could be hand-pollinated.  Hand-pollination allowed global cultivation of the plant. 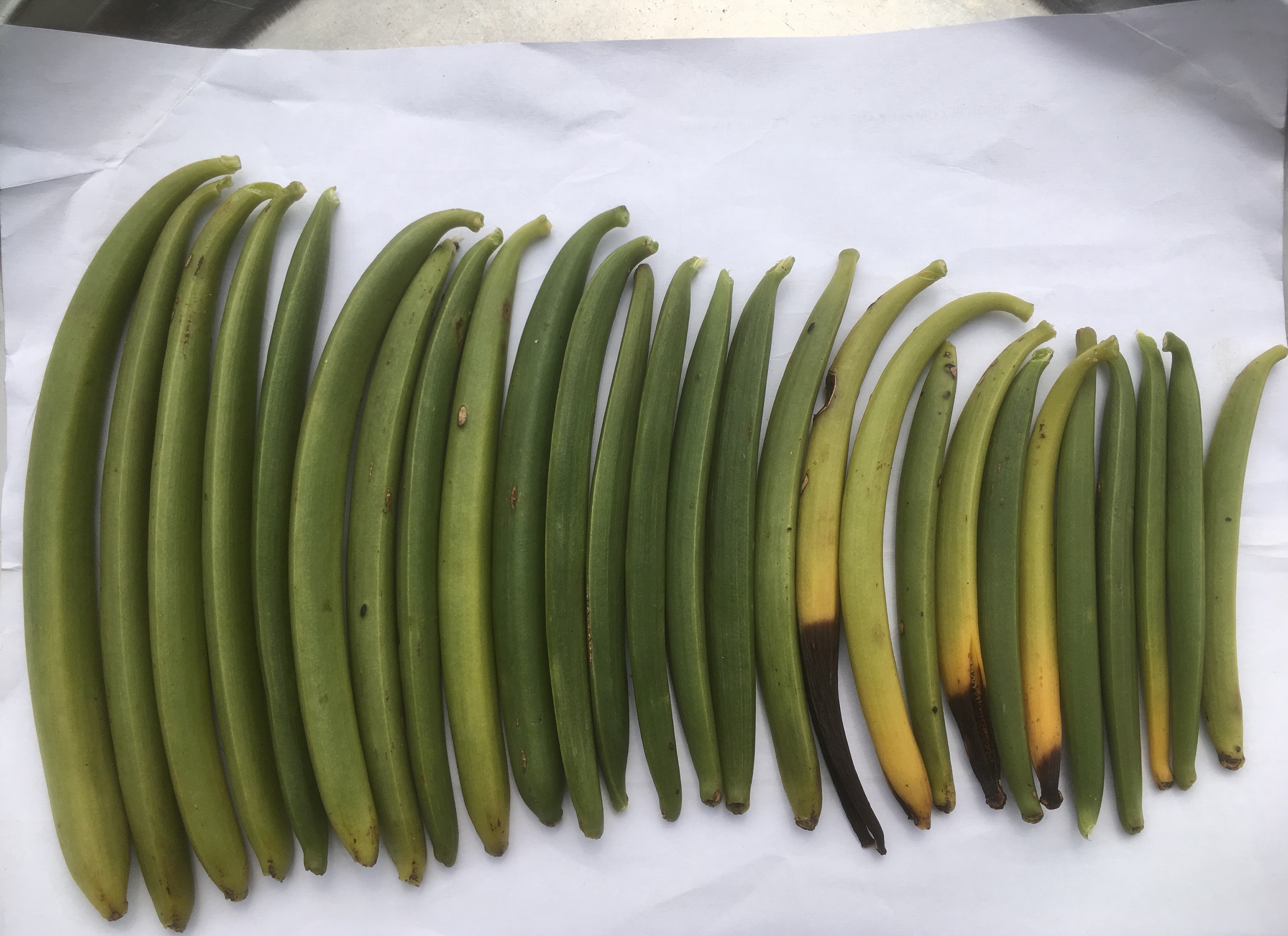 Mature Green Vanilla Beans
From Our Own Vanilla Plantation in Uganda

The syncarpous gynoecium constitutes a stigma, a style and an inferior tricarpellate unilocular ovary bearing placentae, from which rows of numerous anatropous ovules differentiate only after pollination.

The fleshy fruits of vanilla vine, improperly called Vanilla beans because they develop from the inferior ovary into elongated pod-like berries with a trigone cross-section. 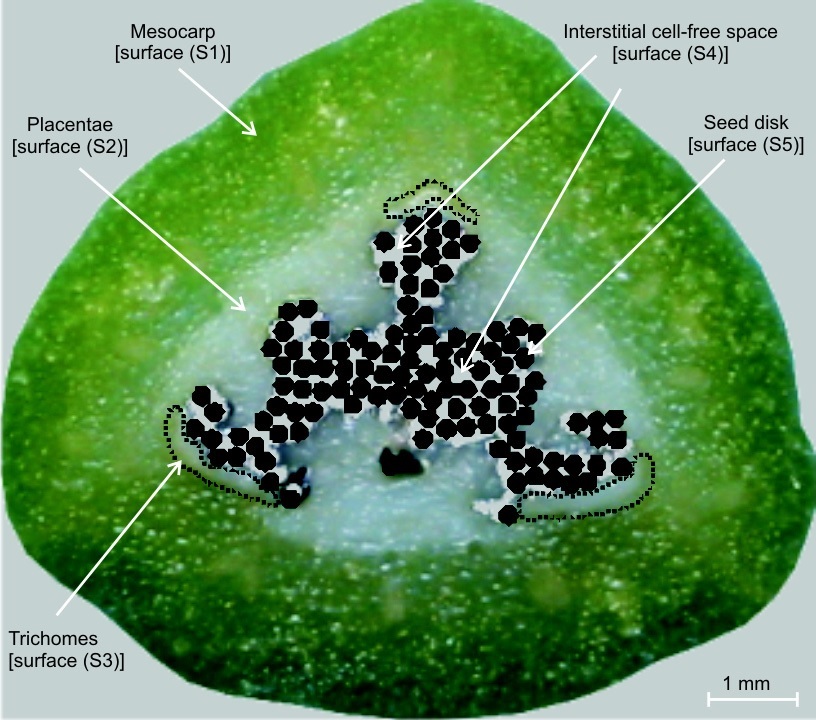 When fruits reach maturity, pods open longitudinally from the apical end by two dehiscence splits, then progressively dry,  in the end turning into a capsule thin cutinized epicarp with thick-walled cells, a fleshy chlorophyllous mesocarp bearing itself two parietal placental bilobed laminae (or ridges) running the fruit length, each lamina being subdivided into two lobes symmetrically bent towards the interlamina area from one side and one of the three trigone angles to the other side. 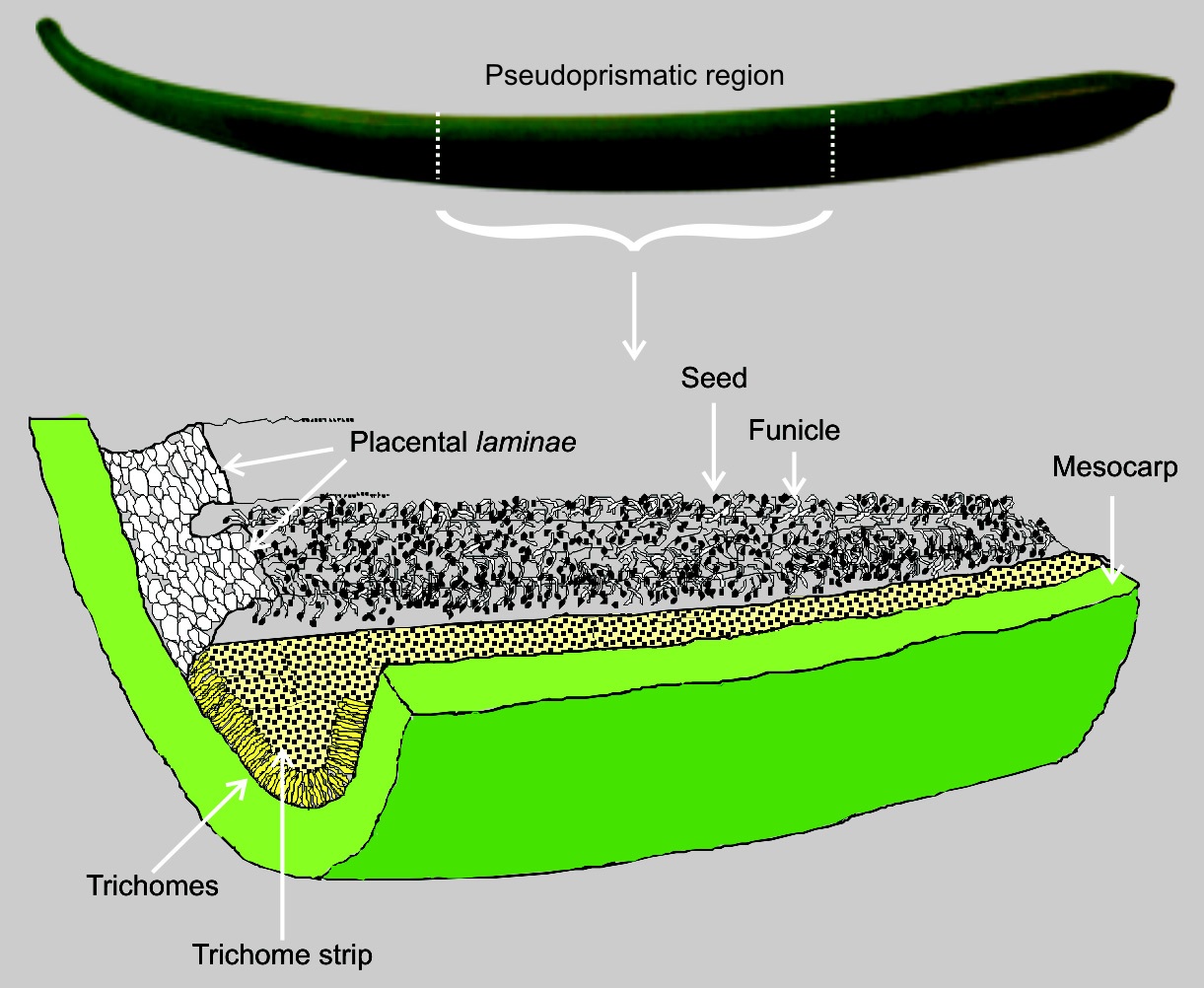 The qualitative differences in the aroma and flavor of vanilla of different species and geographic origins are quite discrete.

You need to buy Vanilla Beans according the resultant flavor you want to get in your Vanilla Extract or Perfume.

Bourbon vanilla (V. planifolia Andrews): This is the terminology used collectively for beans from Madagascar, Réunion, the Comoro Islands and the Seychelles.

Tahitian vanilla (V. tahitensis): This vanilla type is distinctly perfumey and flowery, fragrant, heliotropinelike, with a rather shallow vanilla character.

It is generally weak in flavor and aroma character.

I can describe Organic Vanilla simply as a Vanilla containing product derived from organic sources. In the case of vanilla beans they should have been grown without GMO adulteration, and no synthetic chemical inputs like fertilizer, and pesticides.

The curing process for the Vanilla beans or the process of making the Vanilla Extract should also be organic; does not use antibiotics, synthetic food additives, or irradiation. A vanilla product can be organic but without being Organic Certified.

Find more about Organic Vanilla and the Organic Certification Process.

In the past few years Kosher for Passover real vanilla extract has emerged on the market. If that is unavailable we would not recommend using the artificial Vanilla Extract.

Instead, bury a vanilla bean in a jar of sugar for a few days and then use a few tablespoons of the scented sugar in place of regular sugar in a recipe. Or, if you are feeling decadent just use the scrapings from the inside of real vanilla beans in the recipe.

You may also just buy Vanilla Extract that is Kosher Certified.

Have a Question or Great Story About Vanilla?

Click below to see the articles from page contributors and comments from visitors to this Vanilla Guide...

Vanilla Beans among suggested Superfoods to help prevent coronavirus Not rated yet
The emergence and spread of the coronavirus have caused panic around the globe. It has infected several thousands of people since the outbreak in Wuhan, …

Finding Real Vanilla Extract in Mexico Not rated yet
Real Mexican vanilla: harder to get but worth the expense Pure, natural Mexican vanilla beans cost more per ounce than silver People often crow about …

Passover Vanilla  Not rated yet
On Passover it is forbidden to eat leavened grain. Regarding Passover the Torah states “In the first month on the fourteenth day in the evening you shall …

Organic Vanilla  Not rated yet
I can describe Organic Vanilla simply as a Vanilla containing product derived from organic sources. In the case of vanilla beans they should have been …

How to Store Vanilla Beans  Not rated yet
Gourmet quality vanilla beans should be flexible, ideally with an oily sheen, and they should smell rich and fragrant. It helps to keep the beans in …

Bourbon Vanilla  Not rated yet
Bourbon and vanilla Bourbon Vanilla (V. planifolia Andrews): This is the terminology used collectively for beans from Madagascar, Réunion, the Comoro …